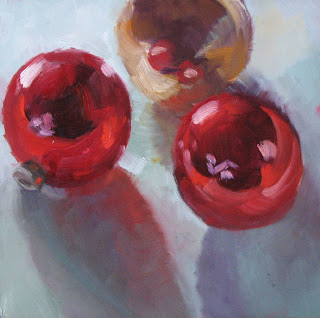 Make The Season Bright
6" x 6" oil on panel
$100.00 + $10. s/h
Due to still being on a different computer, please go to Daily Painter Originals where the Paypal button works, or contact me if interested in purcasing.
And another ornament painting!
Posted by Pam Holnback at 11:50 PM 12 comments: 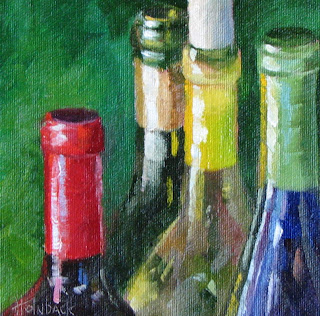 Cheers!
6" x 6" oil on panel
$100.00 + $10. s/h
Again, I am not able to add a Paypal button from this computer.  If interested in purchasing, please go to Daily Painter Originals or contact me.  Sorry for the temporary inconvenience.

Painting the reflections found in bottles and ornaments has been such a great exercise!
Posted by Pam Holnback at 11:50 PM 10 comments: 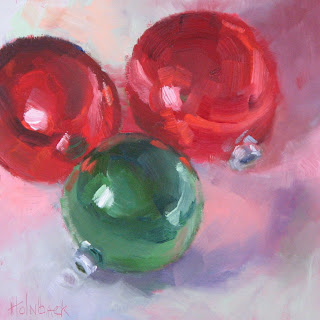 Merry and Bright
6" x 6" oil on panel
SOLD
I am posting this from a different computer.  It will not let me add a Paypal button (I tried for more than 1 hour!)  So, if interested in purchasing, please go to Daily Painter Originals, on my sidebar, ....there is a Paypal button there, or contact me.
I continue to work on elipses, circles, spheres, and holiday pieces.

Just Outside of Leadville 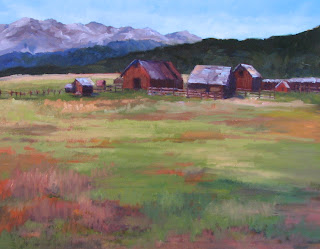 As the title says, this ranch is just outside of Leadville, Colorado.  This is from a trip we took there in early September.  It's now abandoned, and like many relics from the old west, falling apart.  But, I wondered about the families who lived there in the past.  And, at this Thanksgiving season thought it an appropriate piece to post when I'm thinking about all that I have for which I am thankful.  A ranch like this couldn't have operated if everyone didn't pull their weight and help each other.  I'm sure that the families who sat around this dinner table were thankful for each other everyday.

Happy Thanksgiving to you and your family.  And may we all be thankful for our families, friends, and health. 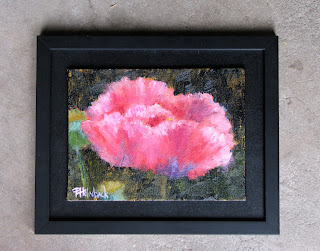 Many of you who follow art blogs and artists on Facebook know Annie Salness and know that she had a stroke several weeks ago.  Like many who have become my vicarious friends, I met Annie through blogging.  She is an incredible artist, wife, and mother of four kids all still at home.  Some of her friends in Portland have put together an "Art Walk for Annie" to raise money to help offset some of her medical bills.  For me, a gift of flowers was something that I could do to help, so, I sent this painting to be a part of the auction.  Click here to find out how you can help. 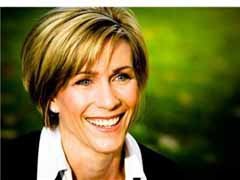 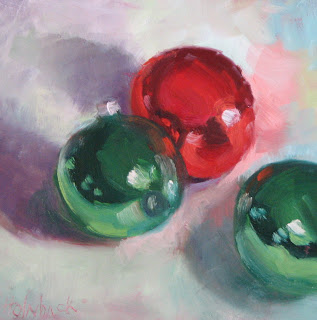 
Since the holidays are coming up, it made sense to me that my practice of circles be spheres for the tree.
Posted by Pam Holnback at 1:00 AM 16 comments: 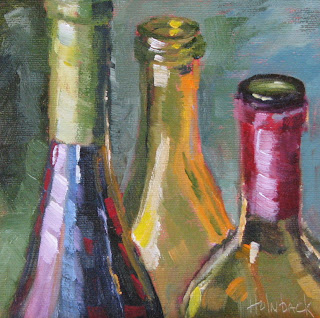 I continue to work on my elipses.
Posted by Pam Holnback at 1:00 AM 7 comments: 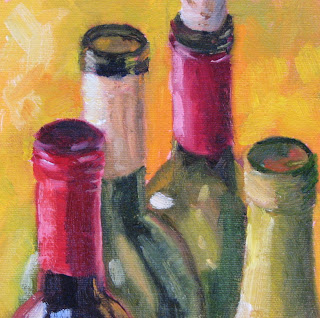 
I'm always giving myself assignments (it's hard to have taught for so long and not continue to think along those lines.)  I've decided that I need to paint elipses and circles.  So, that's what you'll be seeing for awhile.
Posted by Pam Holnback at 1:00 AM 10 comments: 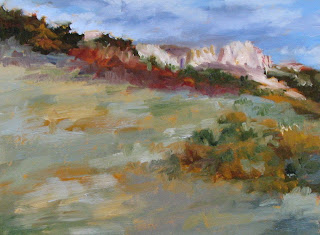 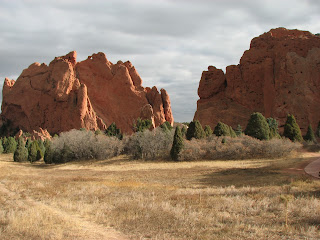 The Garden of the Gods Park has incredible geologic features: ancient sedimentary rock beds of red, blue, purple, and white sandstones, conglomerates and limestone that were deposited horizontally, but have now been tilted vertically.  These shifts and faults were caused by the immense mountain building forces caused by the uplift of the Pike Peak massif. 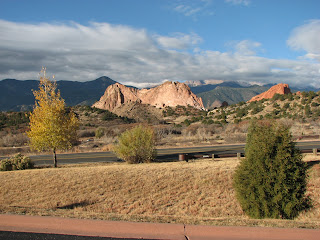 This is the view from the Garden of the Gods Visitor Center parking lot, with Pikes Peak hidden in the clouds. 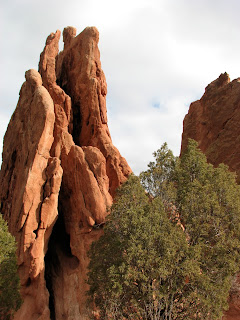 The name Colorado is said to come from the color of the sandstone.

Morning at the Garden of the Gods 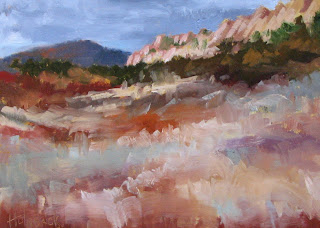 
Last week the weather was absolutely spectacular, in the 60's everyday.  For me, that means it's time to be outdoors.  So, I spent Wednesday morning at the Garden of the Gods. Since this is one of the most famous and beautiful gardens in the world, I wonder if this should go towards my "100 garden painting" series.
Posted by Pam Holnback at 1:00 AM 17 comments: 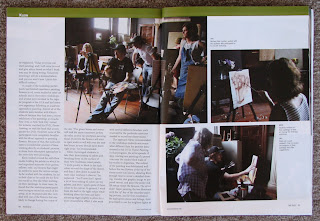 I recently heard from blogger friend Cathyann Burgess that she saw me in American Artist Workshop Fall Magazine.  Then I heard from my sister, Natalie Italiano, that she'd seen me, too.  So, I decided to buy the magazine.  And, here I am last summer in Michael Klein's Flower Painting workshop in NYC.
I feel like I look so serious, but I guess I'm just concentrating!  The second shot I'm sketching in the still life.  Not sure when the next time will be that there will be a photo of me painting in a magazine! 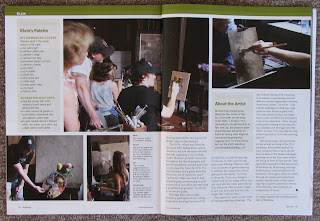 Here I am sitting right next to Michael working on my still life.  I guess this is my 15 minutes of fame for this month!
Posted by Pam Holnback at 1:00 AM 11 comments: 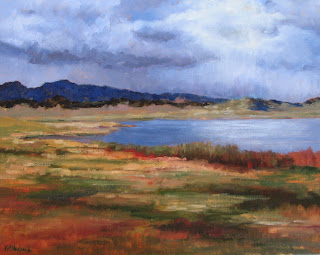 
This is another piece from an afternoon that my husband and I spent at Eleven Mile Reservoir.  In this one I used two of Edgar Payne's composition directives:  S and Diagonal.  If you start at the bottom right hand corner, I want your eye to follow the green grasses into the piece and follow the greens up and over to the reservoir bank then up the water's edge to the small cove in an S.  From there you follow the banks, in another S, but I also lightened the grasses, so your eyes follow the lighter value across the far shore to the small hill and up through the rain to the clouds, which are in the focal point area.
If you enter the painting from the top left, the clouds and mountain top will send you diagonally across the piece to the small hill and up through the rain to the clouds in the upper right hand focal point.  Then, more diagonals in the clouds will allow your eyes to dance back into the piece and continuously move around.  At least, that was my plan!
Posted by Pam Holnback at 1:00 AM 14 comments: 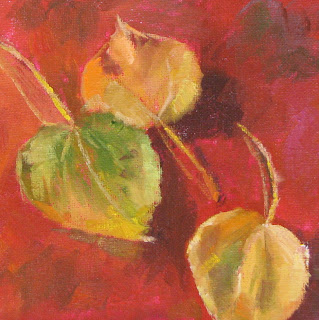 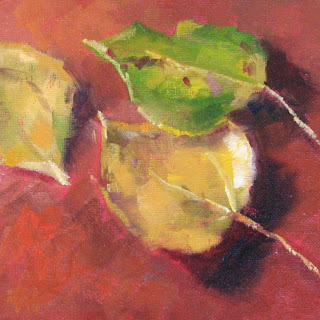 Backyard Aspen Leaves
6" x 6" oil on panel
$100.00 + $10. s/h
All of the leaves are gone from the aspen trees in the mountains.  But, in our backyard, the leaves are still on the trees and quaking in the breeze. Normally, they've all fallen by November.  Not sure what happened this year, but, it allows us to procrastinate the leaf raking.

The Lafayette Gallery and the deYoung Museum 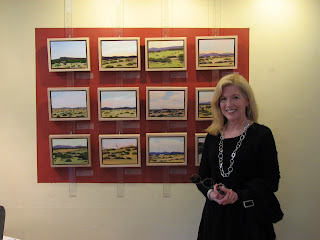 Several of my days in San Francisco were spent with friend Nancy Hartley.  I met Nancy in September 2008 in Santa Fe in a Carol Marine workshop.  I saw her again in September 2009 when I was in California.  In January of 2010 we had a workshop reunion in Austin where most of us were able to get together and take a workshop from Laurel Daniel.  And, here we are again!  I went to the Lafayette Gallery to see Nancy's show: "Southwest Inspirations", drivebys of Highway 25 between Albuquerque and Santa Fe.  Nancy's pieces are bold, geometric and colorful.  Check out her blog if you're not familiar with her work:  Nancy Hartleys Art Adventures.

The next day I met Nancy at the deYoung Museum to see the Post Impressionist show:  "Van Gogh Gauguin, Cezanne and Beyond".  It was a huge show with works from the Musee d'orsay, which is being remodeled.  How great that instead of storing the paintings they sent them to San Francisco. There were  a lot of Gauguins, Cezannes Seurats, Nabis (which I didn't know much about), Lautrecs.  One of my favorite pieces was Van Gogh's "Bedroom at Arles".  I had a puzzle of that as well as a poster on the wall in my classroom when I taught. 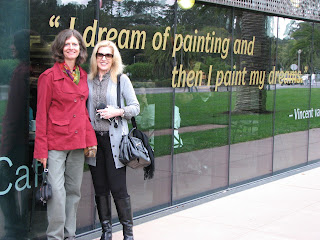 Here we are outside of the museum.
Posted by Pam Holnback at 1:00 AM 6 comments: