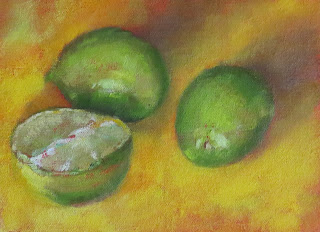 When we were in Mexico this winter we saw, and had served to us, so many limes!  We couldn't believe it!  We saw trucks filled with limes up to the very top.  Plates of lime slices were on almost every table for every meal.

One of our favorite meals in Mexico was pork tacos (tacos de puerco.)  I think that we ate these at least twice each week, sometimes three times each week.  Every taco stand and little restaurant had their own version, but every one came with limes.  And, at about 16 pesos to the dollar when a taco was 10 pesos we were eating for under $3.00.  Upon our return we googled Mexican pork tacos and made them three times before we came up with a version that we liked.  And, of course, we had to have limes.  The lime juice really adds great flavor to the tacos.  Since we've had so many limes around the house lately, I just had to paint them!

Since the 1950s Mexico has been the world's largest producer and exporter of limes.  There are two popular varieties of limes grown in Mexico, key limes and Persian limes (which is what we here in the States call "limes".)

Most of the limes are grown in the warmer southwest, which is where we spent most of this past winter.  No wonder we saw and ate so many limes! 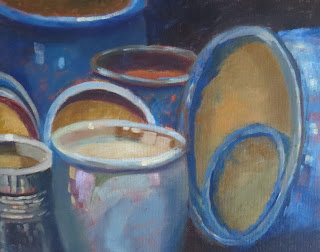 This painting was done partly plein air and partly in the studio.  With plein air paintings you have to paint quickly and not chase the light and shadows.  But, with all of these elipses the drawing part of the piece took quite a long time.  Consequently, the light and shadows (which I had blocked in) had changed so much after several hours that I knew I needed to stop.  I had taken a picture when I started, so I had my choice of being like Monet and going back to the same spot another day soon after, or heading home and finishing in my studio.  I chose the later.  Being like Monet will have to be another time.
Posted by Pam Holnback at 2:00 AM No comments: 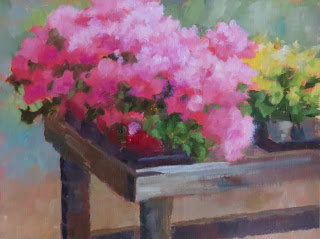 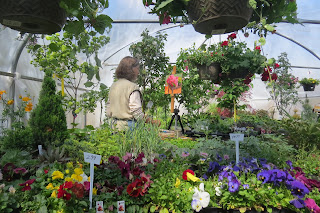 Last week my plein air group, Garden Artists, was scheduled to paint at Summerland Gardens.  It was a windy morning, so painting in the out door nursery/garden area would have been challenging.  But, the weather in the greenhouse was perfect!  What a great place to paint!  And, for those of you who live in the Colorado Springs area, be sure to stop in the Upstairs Gallery!
Posted by Pam Holnback at 2:00 AM No comments: 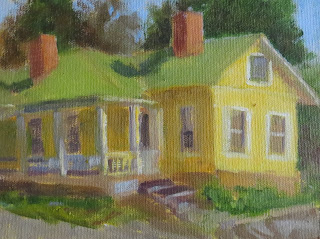 This is a plein air piece done one April morning in Old Colorado City, an older neighborhood filled with charming homes and stores, here in Colorado Springs.  I loved the bright morning light shining on the east side of the house.
Posted by Pam Holnback at 2:00 AM 2 comments: 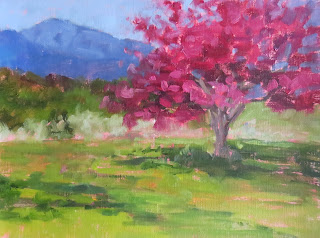 I'm lucky to live in such a beautiful place!  Every where you look is another painting.  Our house sits next to Bear Creek Park, an almost 700 acre county park.  If you looked about 50 yards to the right of this tree you'd see our house.  So, one nice morning a few weeks ago I went practically right outside our door for this painting.

As artists do, I left out what was not necessary (I guess that's what's called artistic license).  In this case a straight cement sidewalk.  At first I changed it to a meandering crushed stone path.  But, that too got removed.  It wasn't need and was distracting.
Posted by Pam Holnback at 2:00 AM No comments: 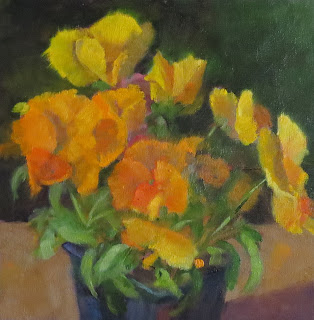 I had some pansies, these and a few others, all ready to plant.  I had to stall the planting until I did a painting of this one still in the black plastic store container.  I love pansies.  They're hardy enough to with stand Colorado's spring weather.  One spring day can be beautiful, sunny and 65 degrees.  The next day can be snowing with freezing weather at night.  But, the pansies survive no matter what we get!
Posted by Pam Holnback at 1:07 PM 2 comments: 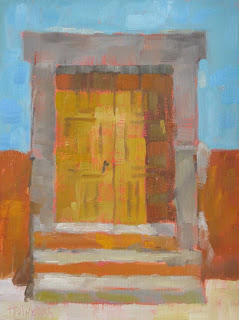 This is another of the colorful, fun doors from San Miguel de Allende.  I could paint a big series of these!

And, a few more door photos! 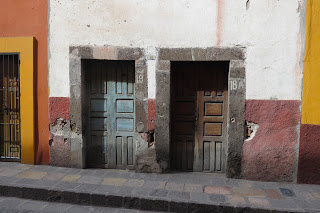 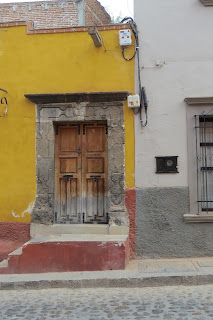 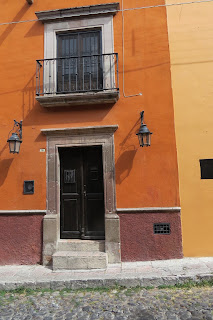 Posted by Pam Holnback at 2:00 AM No comments: 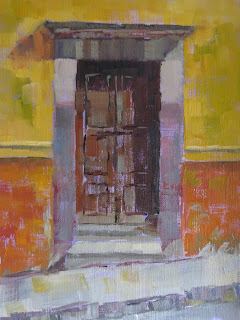 We spent almost two weeks in San Miguel de Allende this past January.  Friends of ours have moved there permanently and we house sat for them while they went to the beach.  San Miguel, in the state of Guanajuato, is a colonial era city in Mexico's central highlands at an altitude of just over 6,000 feet.  It's known for its baroque Spanish architecture, its thriving art scene, and its population of North American ex-pats.  In the city's historic cobblestoned center is the neo-gothic church Parroquia de San Miguel Arcangel.  Its dramatic pink towers rise above the main plaza, El Jardin (the Garden.)  For me the most interesting part of the city's architecture were the old doors of all of the homes.  I loved the colors of the doors and walls, but I really loved peaking into the homes when the doors were opened.  One never knew what amazing home & court yard garden was hidden away.

Here are some of the colorful doors & walls of San Miguel: 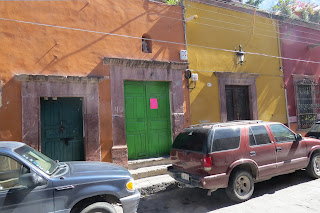 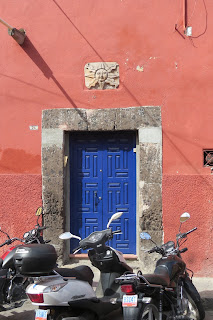 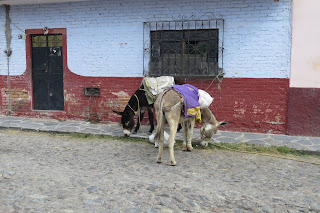 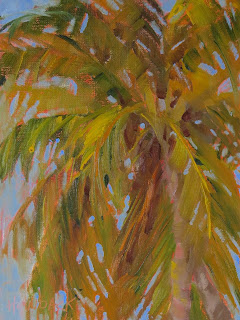 This is another palm tree from the garden of our hotel in Barra de Potosi, Mexico.  It provided just a little bit of shade where I was able to stand and paint.

Down the beach and road from Barra was the area called Playa Blanca.  Late one afternoon/early evening we went to the Ayoticalli Turtle Rescue Center.  It's run by volunteers who comb the 6 mile stretch of beach at night looking for turtle eggs.  They protect the eggs until they hatch.  Almost every day from 5 - 6 they give a lecture on the preservation of turtles, the plight of the baby turtles and why conservation is important.  Then, everyone at the lecture participates in the release of that day's baby turtles who have recently hatched and are ready for their journey into the ocean.  Of 2,500 babies released, maybe 5 will live to come back to lay eggs on this same beach where they were born.  On average, 1 in 1,000 of the babies that make it to the water survive.

Here are some of the photos we took of our release: 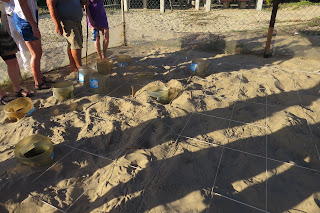 Eggs are carefully collected by volunteers at night preventing them from being eaten by birds and crabs.  They are then buried in this protected, fenced environment until they hatch.  A female turtle lays about 80 - 100 eggs which she buries in the sand before returning to the sea.  Turtles have an incubation period of about 2 months. 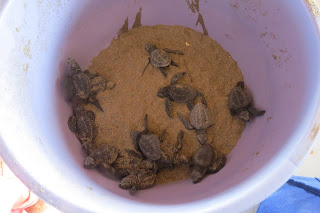 New born babies are carefully removed from under the inverted and cut plastic bottles (seen in the sand in the first picture) where they were buried.  That days' new borns are put into a bucket, then each visitor is given one baby which we carried to the shore in a tiny plastic bowl. 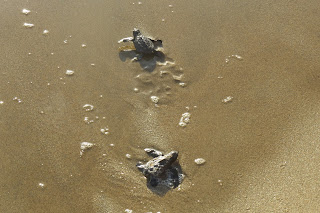 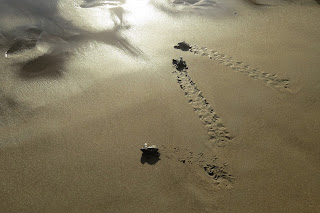 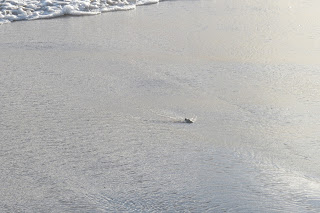 Once at the shore, we released all of the babies and watched as they made their way to the ocean.  Sea turtles are born with the instinct to move toward the brightest direction.  On a natural beach, this direction is the light of the open horizon.  Sea turtles (those few who survive) can live 40 - 60 years.

Posted by Pam Holnback at 2:00 AM No comments: