I will be painting in the upstairs gallery during the Holiday Open House at Summerland Gardens on Friday 11/30 and Saturday 12/01.  The Open House is from 10 am - 8pm.  I'll be there painting each day from 2 - 6.  Please stop by for holiday cheer, gift ideas, unique decorations, trees, wreaths, paintings and to see me!  Hope to see you there!

A few of these paintings are still available.  Please contact me if interested.
Posted by Pam Holnback at 3:46 PM 5 comments: 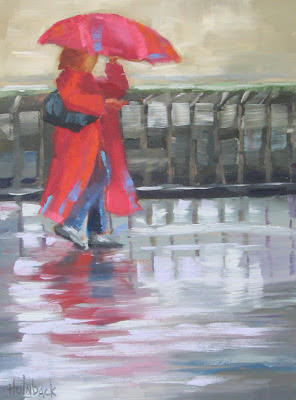 I loved the reflections of the rain coat and umbrella on the wet sidewalk.
Posted by Pam Holnback at 3:00 PM 12 comments: 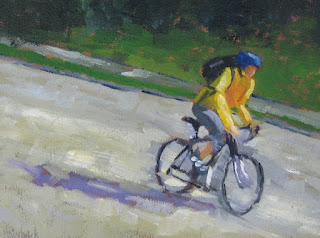 
I loved the way this rider's yellow jacket stood out against all of the grays on the road.
Posted by Pam Holnback at 4:17 PM 8 comments: 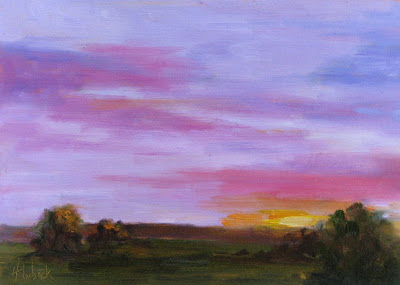 We're getting ready for our kids and friends to be here for Thanksgiving.  Looking forward to having a full house again.  I am thankful that both of our kids have great jobs.  But, those great jobs moved them both out of state.  So, I alway look forward to their visits. 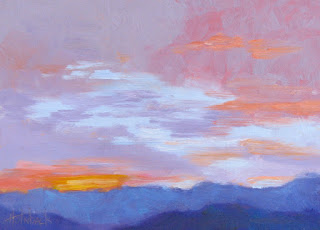 For those of you who follow my blog, you've seen that I paint a lot of skies.  When you live in the west you have incredible, vast, open skies all around.  People who visit from back east can't believe how much sky you can see.  I've been places, in the south, east, and northwest where the trees are so tall and the greenery so thick and lush that you hardly know what the sky looks like!  That is certainly not the case here in Colorado!  Many of my paintings are of the sunrise view from our deck.  And many, like this one, are of the sunset view from our mountain property.  When I look at the views in front of me, I know that I'm blessed.

This afternoon I delivered my painting, Veterans Day, to the veteran who purchased it on Veterans Day!  It was so nice to meet her.  She's in the Reserves and here in Colorado Springs this week.  Tomorrow she'll head home to California.
Posted by Pam Holnback at 6:51 PM 6 comments: 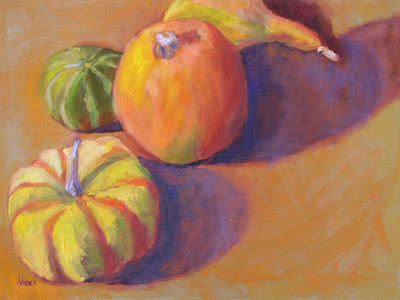 I love the fall.  I love the warm colors of autumn landscapes, I love the chilly (but yet still a bit warm) days.  I love the sunrises.  I'm not really fond of the time change and the dark, late afternoons!
Posted by Pam Holnback at 5:44 PM 8 comments: 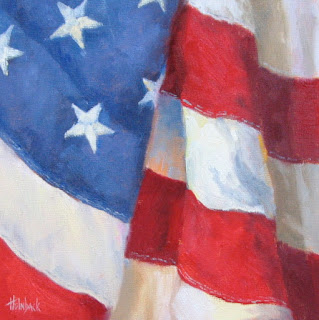 I started this piece earlier this week on Election Day.  It seemed appropriate to post it on Veterans Day.     This is the flag that my dad received for his dad's service to our country.  My dad passed it down to my son.  I have painted and posted it before.

While today, Saturday, isn't Veterans Day, today is the big Veterans Day Parade in downtown Colorado Springs.  We have a lot of Vets here as the military is a strong presence in the town with Fort Carson, NORAD, Peterson Field, Schriever Air Force Base, and the Air Force Academy.  Many Vets stay and make Colorado Springs their home and many Vets return to live here when they retire.  Sunday is the actual Veteran's Day but it is observed on Monday with closures in all of the government buildings as well as our local schools.

I come from a family of Veterans.  I'll introduce you to some of them: 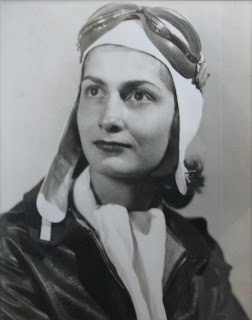 This is my mom, Rosalie Phillips Johnson (1921-1971).  She became a pilot after college.  She served in WWII as a WASP, Women's Air Force Service Pilot.   The WASPs flew new planes from factories to embarcation air fields where they were either flown or shipped overseas. 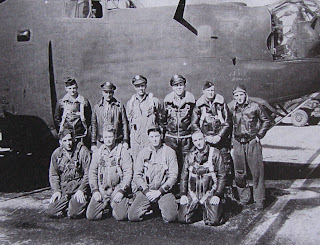 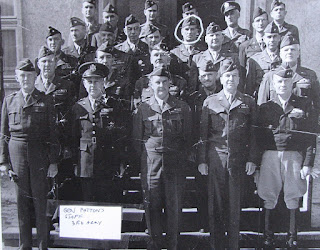 My grandfather, Charles Thomas Johnson, (1890-1964) is the one circled.  He served in WWI and also was a Colonel in WWII.  This is General Patton's staff (you may recognize him in the front row.)  I can't imagine how it must have been for my grandma to have her husband and only child both in Europe during the war.  She also served our country as an ambulance driver taking soldiers from Midway airport to the hospital. 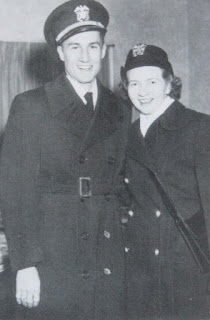 My husband Peter's parents were also Veterans.  They both served in the Navy.  This is their engagement photo.  My father-in-law, Peter Carl Holnback, was a fighter pilot in the Pacific.  My mother-in-law, Olive Hird Holnback, was a WAVE:  Women Accepted for Voluntary
Emergency Service. 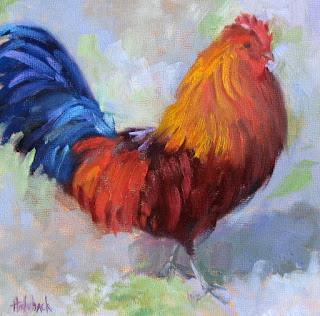 This rooster has just been sent off to California.  It was painted for a woman who wanted a rooster piece in her kitchen.  I hope she likes it!  This strutter lives locally at the Rock Ledge Ranch.

Traditionally, in the philosophy of the Chinese Zodiac, one of the symbols of the rooster is showy behavior.  And, that they lead other birds in the flock to the food that they have found.  Hmmm....I think that I would prefer if they were more dignified and pushed and encouraged the flock to search for it's own food. 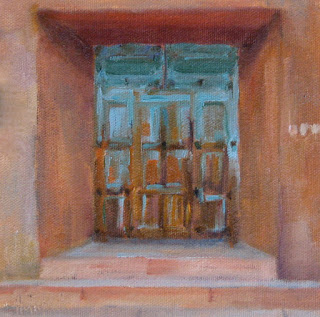 Last week I was going through another cleaning phase.  My studio used to be our dining room, which means there isn't a closet.  So, everything is on shelves or in china cabinets (the china that we inherited from my husband's grandmother is now in the pantry).  We all need to purge at times, so I was going through the top shelf where I have old studies, workshop paintings and pieces from the past.  When, lo and behold there in front of me was a painting from a workshop about ten years ago when I first started painting... 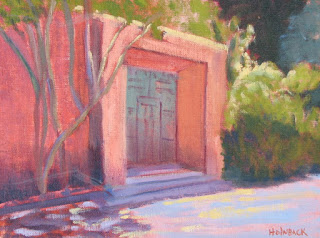 I think it's the same house!  I was not painting from my own photos, and don't recall how I got this photo, but....the door is so similar.  I guess I've aways loved these old doors.  It looks like there was a bit more paint on the bottom of the door ten years ago.  The tree on the left is gone, there was a car parked there last month.  Interesting!

And, click on Kelley MacDonald's blog to see her weekly Santa Fe Fling piece!  Check out all of her work on her blog! 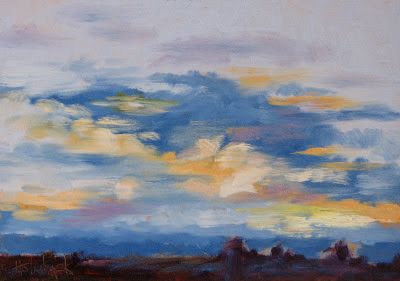 Heavenly Blue
Oil 5" x 7"
$100.00 + $10. s/h
This is the second of four sunrise pieces that I painted last week.  I truly am grateful that I look at this view.  This mornings sunrise was a good one, beautiful blue-violets and oranges.  Maybe you'll see it one day!
Posted by Pam Holnback at 5:00 PM 6 comments: