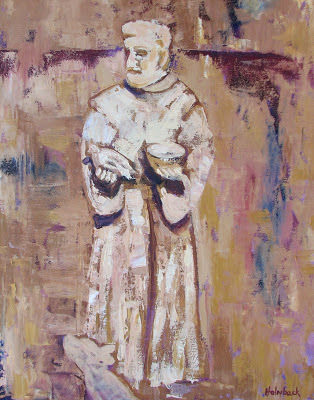 This painting of St. Francis is of a statue from Mexico.  I don't often paint with a palette knife but I like the way this turned out.

I knew that St Francis was a guardian of animals, we have a different sculpture of him in our garden.  But I didn't know much more so I googled him.  I find this pretty interesting.  Here is what Wikipedia has to say:

Francis of Assisi (born Giovanni Francesco di Bernardone; 1181 – October 3, 1226)[2] was an Italian Catholic friar and preacher. He founded the men's Franciscan Order, the women’s Order of St. Clare, and the Third Order of Saint Francis for men and women not living monastic lives.[3] Though he was never ordained to the Catholic priesthood, Francis is one of the most venerated religious figures in history.[3]
Francis was the son of a wealthy foreign cloth merchant in Assisi, and he lived the high-spirited life typical of a wealthy young man, even fighting as a soldier for Assisi.[4]While going off to war in 1204, Francis had a vision that directed him back to Assisi, where he lost his taste for his worldly life.[4] On a pilgrimage to Rome, he joined the poor in begging at St. Peter's Basilica.[4] The experience moved him to live in poverty.[4] Francis returned home, began preaching on the streets, and soon amassed a following. His Order was authorized by Pope Innocent III in 1210. He then founded the Order of Poor Clares, which became an enclosed religious order for women, as well as the Order of Brothers and Sisters of Penance (commonly called the Third Order).
In 1219, he went to Egypt in an attempt to convert the Sultan to put an end to the conflict of the Crusades.[5] By this point, the Franciscan Order had grown to such an extent that its primitive organizational structure was no longer sufficient. He returned to Italy to organize the Order. Once his community was authorized by the Pope, he withdrew increasingly from external affairs. In 1223, Francis arranged for the first Christmas manger scene.[4] In 1224, he received the stigmata,[4] making him the first recorded person to bear the wounds of Christ's Passion.[6] He died during the evening hours of October 3, 1226, while listening to a reading he had requested of Psalm 141.
On July 16, 1228, he was pronounced a saint by Pope Gregory IX. He is known as the patron saint of animals, the environment, and is one of the two patron saints of Italy(with Catherine of Siena). It is customary for Catholic and Anglican churches to hold ceremonies blessing animals on his feast day of October 4.[7] He is also known for his love of the Eucharist,[8] his sorrow during the Stations of the Cross, and for the creation of the Christmas creche or Nativity Scene.[9]
Posted by Pam Holnback at 4:00 PM 10 comments: 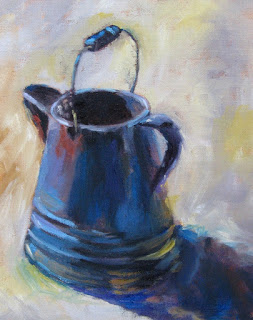 I posted this old cowboy coffee pot last summer but at that time it wasn't for sale;  I had it set aside for a show.  I didn't put it in the show, so now it is available. 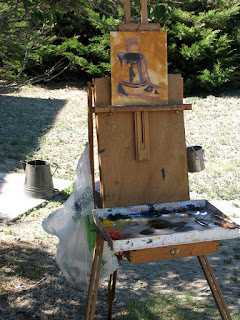 This was a plein air piece that I did last summer at the Medano Zapata Ranch Artist's Gathering. 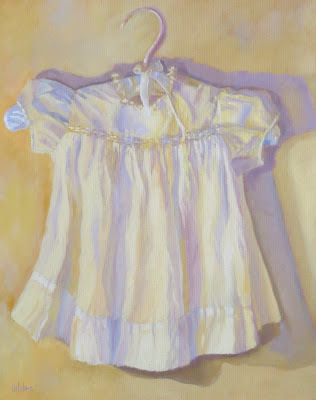 This dress used to belonged to my older sister and me.  I guess it still does belong to me.  My sister and I must have worn this dress.  Obviously we didn't wear it often as it's still in great shape.  I wanted to continue with my recent Sargent white and gray study.  Using a similar palette to the one a few posts ago I used the following painting by Sargent as my influence for this piece: 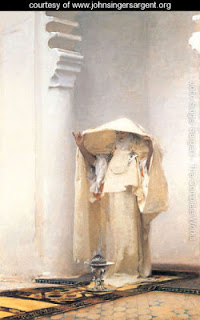 I have always loved this painting.  His whites are incredible;  they are beautiful and ochery.  So, I figured I must have a white dress somewhere. 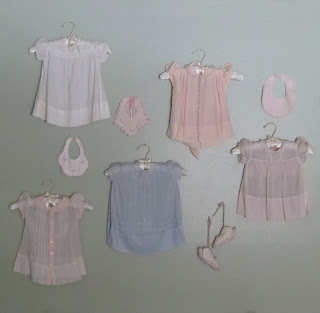 This is a wall in my daughter's room.  And there it was...a white dress.  My set up ended up making my whites more yellow than those in Sargent's painting.  But, influences start somewhere.   I would love to paint all these little dresses.  One of these still has the price tag:  $2.47.  Obviously we never wore that one!   My mom probably didn't want to hand wash and iron it!  These were wrapped in tissue paper in an old trunk of mine.  It's interesting how some things get kept through the years, the moves, the family changes.  I guess nostalgia caused my mom to keep them.  And, after my mom died when we were still kids and we moved to another house, my dad must have had a moment of emotion during packing and kept them.   Not sure where the booties and bibs came from (they look really old) and now there's no one to ask. 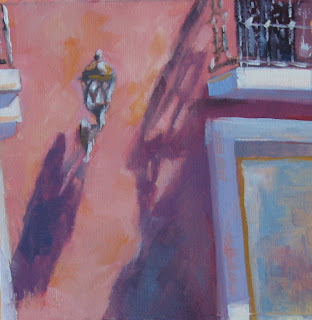 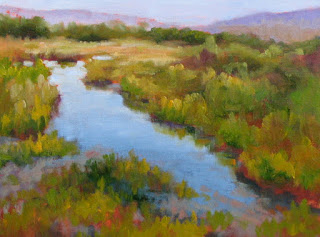 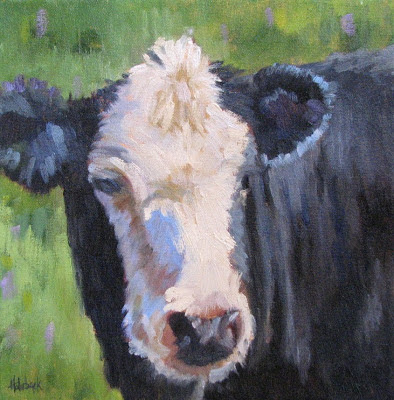 This cow lives up in the mountains near Antero Reservoir in South Park.  He let me get pretty close and just seemed to be as interested in me as I was in him!
Posted by Pam Holnback at 3:01 PM 10 comments: 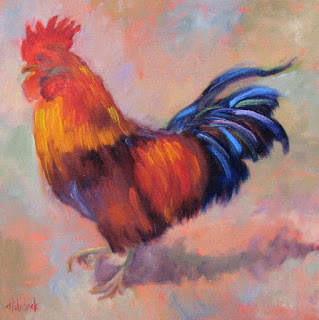 
I have painted this rooster several times before.  He lives at the Rock Ledge Ranch.  I love how roosters strut around and think they're the king of it all! 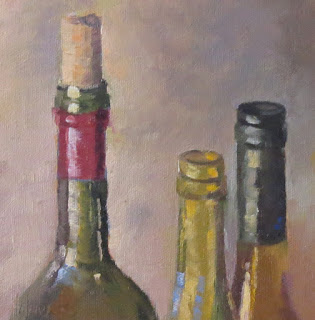 This was the last of my 30 in 31 and also painted for the wine tasting on February 7th at G44 Gallery 1785 South 8th Street, Colorado Springs.

Again for this piece, as I've done in the past, I googled "sayings about wine" and found these words.
Posted by Pam Holnback at 2:59 PM 9 comments: